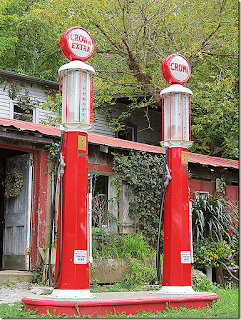 I told Judy I want to visit Rabbit Hash, Kentucky.http://www.rabbithash.com/ A friend of mine claims the town has a general store that has been in operation since 1831 and that a dog is mayor. I don't know what kind of dog it is but I could run against him, hand out catnip  and win with a landslide of litter. The town is on the Ohio River and has been a trading center for the farmers in Kentucky and Indiana.
I  prowl the Internet at night while Judy sleeps but sometimes I get so excited from a discovery my tail twitches and I pounce onto her bed hoping to wake her so she'll come look.

I heard Judy talking to her friend Vickie in Florida today. They chattered on about how it was going to be so nice to see each other again. It worried me because Vickie was telling my mom about someone she knew who was riding her horse across country to raise money for cancer. She said the woman was just taking her time and it had been months since the woman had slept indoors. 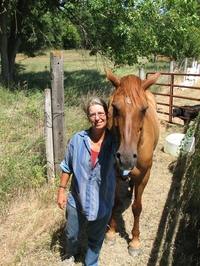 Judy thought that would really be an adventure. I just don't think I could do that. I still have nightmares from those huge animals in Tombstone, AZ. that pulled the stagecoach past our campsite.

But I don't think I have to worry. Every night in the motor home Judy snuggles  in bed with me and whispers  how great it is.. I don't think she's ready to rough it like the woman Vickie talked about. 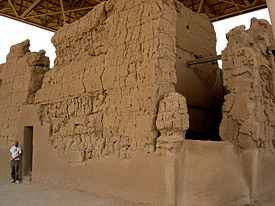 I found this place on the Internet  that looks like it's right up my scratching post. It is called Casa Grande near Tucson, AZ.  If it isn't made out of sand I'll eat my cowboy hat. ( You haven't seen my calfskin cowboy hat, no? I'm saving it to wear when we stop in San Antonio, Texas.)

About ninety miles south of Tucson is an old mining town called Bisbee. I don't know what is there for me to do but Judy will love the history and shopping. I'm sure I'll be tuckered out after digging around Casa Grande. 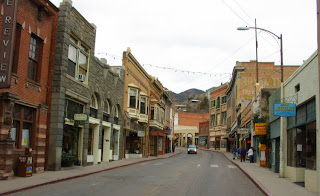 So I have researched Arizona and realize we could spend months touring  Tombstone, Fort Hauchuca, Kartchner Caverns, and Cochise country. My paws are itching to move on Next week I will concentrate on Las Cruces, New Mexico and begin to explore Texas. Any of you cats out there in cyber land have any suggestions?

Posted by Judy Howard at 6:43 PM No comments:

CAN YOU GUESS OUR SECRET?

Remember last week I was afraid to talk to Judy? Well, I told Judy my secret. She promised not to tell and I swore I would not reveal her reaction. But I am so excited. I saw her looking at the maps yesterday. I pounced on her finger as it traced a line along Interstate 10. I know what that means! But I can’t tell because it’s a secret.


We spent some time in the motor home last night after it cooled off. I jumped up in each cupboard and pointed out the inventory. We need laundry soap and quarters, more chemicals for the holding tanks, and paper goods, like plates, bowls and towels. Judy made a list as I rolled around on the microfiber throw rugs that are so soft. I am purring and pacing. I am not sure when what I can’t talk about will happen, but she promised it will.


It has been so hot this summer all I can think about is last summer in Wyoming, North Dakota, and Colorado. Oh how I miss those cool days. I have been complaining about the heat here in southern California to my friends I’ve met in my travels throughout the south. Maybe I should be more grateful for my air-conditioned crib when I look at the pictures they send.

I am purring a sigh of contentment just knowing what my future has in store. Meanwhile I'll finish out these hot days dreaming of adventures to come. I promised Ricky, Chipper, Tiger and Bucko we will meet again.
Posted by Judy Howard at 9:54 AM No comments:


I haven’t told anyone what’s bothering me, but today I decided to lay it all out in the sand. And then when it’s spread smoothly and exposed, I’ll cover it up. It will be gone - my secret that I have been holding in. I’ve told no one, not even Judy.
I’m afraid to tell, especially her. What if she doesn’t understand? What if she gets mad? What if she throws me out, or even worse, what if she finds me a new home? I'd rather live on the streets, like I did when I was a kitten than pretend to love someone else. 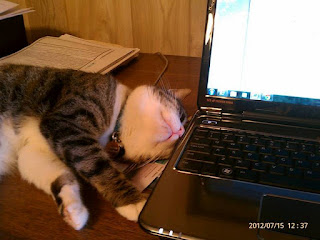 Judy has expectations of me that, up until now I have been happy, no, honored and proud to fulfill. Posing as the receptionist at the grooming shop wasn’t even a job. I reveled in making the customers smile, the golden retriever in the cage bark in excitement, and soothing Judy’s harried nerves when her schedule became hectic. The business has been my life. Summer mornings meant a leisurely ride to work in the golf cart, watching cars roar by as I sniffed the cool California air. And evenings at home we fell asleep together in the chair, exhausted from the day’s work. Judy would say, “Another day another dog,” then we would pad off to bed. I would curl up on the covers at the foot, on top in summer, under in winter.
So my secret? What am I hiding? Life has changed. I have changed. I want more. If Judy isn’t grooming, she is always at her desk. I lie nearby watching the mouse, wishing there was more, - wishing for the desert flora of Arizona, Mississippi mud to roll in, and mice in Maine in the spring.
﻿﻿ 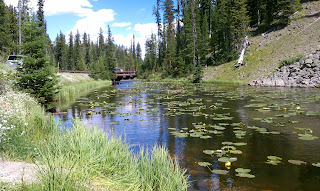 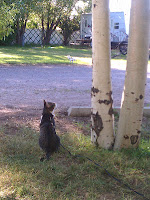 I’m telling her my secret desire tomorrow. I want a vacation. No dog grooming. No book writing. Just the two of us. We need those special moments, listening to the crickets chirp and the woodpecker’s tap-tap. We need to hear the Rio Grande’s gurgle and see the full moon’s reflection on its waters. I want to meet the cats that hang out on the pier in Nova Scotia and prowl the Everglades. 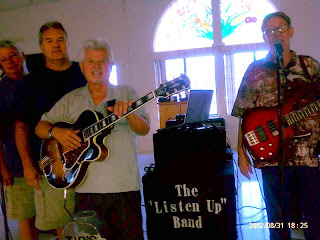 Judy told me about Jimmy Ortega and his "Listen Up Band."  They played easy listening music while she dined with fellow Escapee members at the pot luck on Friday night.If you need a band for your event, Judy got their email teleguitarman@peoplepc.com .
. 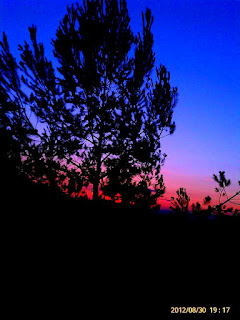 The evenings were picturesque every night, the nights were flourecent from the full moon.

Posted by Judy Howard at 5:34 PM No comments: