A NEW FEATHER IN MY CAP

No I haven't killed any birds. Really?

Seriously, I have another title to add to my resume. I have been trying to convince Judy for along time that I know how to attract the crowds. who could resist this face? 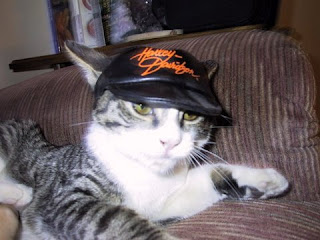 If Judy hasn't told you already ( check out her blog,     ) I am honored to take on the exciting task as her publicist.

I  want to reassure every one of my qualifications as publicist. I worked as Snoop Dog's publicist for several years and made some big changes for him, the biggest, his new name, Snoop Lion. His new identity inspired the album, Reincarnated,  released in April.

Snoop Dog, I mean Snoop Lion, can tell you my influence spiked his career to new heights. I am sure Judy will be amazed by the way her platform will soar.

I developed a few habits from hanging out with the rapper. I spent a lot of hours sitting in on rehearsals and sometimes, when we were just jammin’, I was allowed to fill in as a backup. Just thinking of all the good times my tail  twitches to the beat of his songs. My contract ended last year but sometimes, without thinking, I still grab my private parts.

Check out the the clip below from one of our rapping sessions. It was "the cat's meow. " We had so much fun making it.

I’m trying to break that bad rapping habit and keep my paws away from my private parts. It’s not a good move for a literary publicist.

I will be working closely with Judy's agent, Jack B. Sellinit from The Harley Rules Press.I have scheduled our first public appearance  and have asked her agent, Mr. Sellinit to accompany her. They will be attending the Canine Support Team Certification Event at the Promenade in Temecula. Veterans will have completed their two week training course to learn how to master their new companions.  What a great day it will be.
High Noon on Friday, June 28th at the Promenade in Temecula.
http://www.caninesupportteams.org/

Perhaps we will find a model for the cover of INVISIBLE HEROES. As head of the Cover Design Department I am still seeking applicants.
Hope to see you there!
Posted by Judy Howard at 10:29 PM 1 comment:

A CAT AND THE SANTA BARBARA WRITERS CONFERENCE

My luggage is packed. I only have one bag. It holds all my belongings, cherished and those not so.

My brush: I like being brushed when I want to be brushed, not any more than that. I want to be brushed on the belly, my back, or my chest when my mood is mellow and everyone is observing how cute I am. I set the timer for five, ten, or fifteen seconds. If the brushing continues past the silent dinging of my timer, I have to run away.
The brush is packed in case I am in the mood.

My hats: I have adopted Judy’s fashion style of wearing hats. A hat allows me to stand out in a crowd apart from other cats. My collection includes a Harley skull cap and an imitation calf skin cowboy hat. The timer is set the same length of time for donning the hats as for brushing. 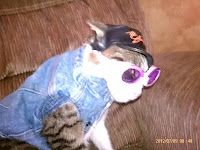 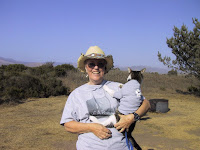 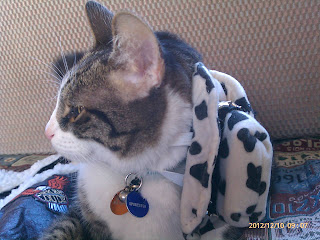 Bandannas: The assortment of these accessories fills an entire pocket in my bag. My scarves represent my love of the holidays, Christmas, Halloween, and Memorial Day to name a few.
Jackets and t-shirts: Beautiful California weather prohibits the necessity for wearing anything but the coat I was born with, but sometimes for a photo shoot or book signing I’m forced to dress for the occasion. I own two Harley jackets, leather and Levi, and a Hearst castle t-shirt that matches Judy’s.

Treats and catnip, toys and more treats: No explanation needed here. Most toys are either feathered or stuffed with catnip.

Collars and leashes:  These are combo sets, one matching the other designed in Harley flames, rhinestones, or leopard patterns, except my favorite, the retractable lead.
The fore mentioned are the part of my wardrobe for public appearances but the retractable leash is for walks and exploration at campgrounds. I don’t go anywhere without it. Last January Judy forgot it under a cypress tree at the Elks club in Slidell, Louisiana. I was devastated when I had to borrow Tika the min pin’s until we made an emergency stop at Petco. 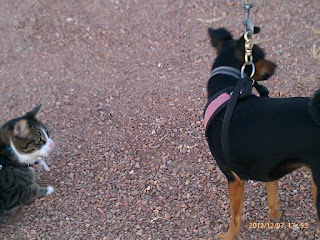 Of course I have my bed and carrier that remain in the motor home. The carrier came in handy when we were under tornado watch in Summerdale, Alabama on Christmas Eve. My food and essentials were packed alongside the carrier for quick evacuation if needed.
Today my things are packed  for our second annual Santa Barbara Writers Conference. I am excited. Here are some pics from last year. What a great place for contemplation an inspiration. 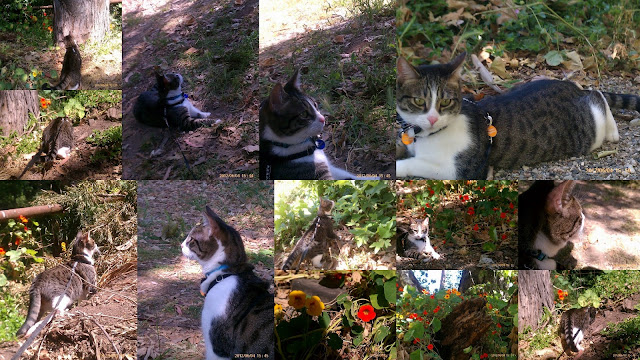 I can’t wait to explore the grounds and enjoy Santa Barbara’s beach weather while Judy attends the conference. It is a busy time for her but I will try to keep you updated on all my adventures.
Posted by Judy Howard at 6:25 AM No comments: