My week settled into one of routine. My mornings passed as Judy’s words clicked-clicked onto the screen. I watched the cursor’s flash for a while but it doesn’t hold my attention like it did when I was young.
Posted by Judy Howard at 1:57 PM No comments:

Email ThisBlogThis!Share to TwitterShare to FacebookShare to Pinterest
Labels: cats, GROOMING, one day at a time, Shitzu

CHARLIE SHEEN AND ME

I worked my cat brain muscles long and hard yesterday helping Judy design her book trailer. I was put out because there was no footage of me.  We argued and because I don’t have speech capabilities I used my irresistible antics. I purred and stared.
I was unable to convince her of my acting abilities. I told her if not me, many of my followers showed interest. "How about one of them?"  She agreed. I would check out their talents. 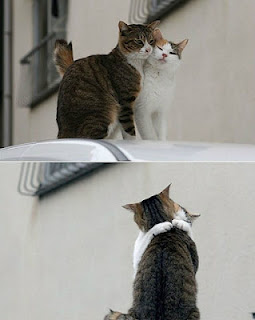 First,Jennifer took me aside and tried to work her charms. "I'll do anything to be in the video," she purred. I tried to explain it wasn't that kind of video.
Next - I call her Blondie -  but her public knows her as Meowing Marilyn, showed me her act. Not shabby. She was really quite good. Her moves flowed with a passion I don’t often see  here in Sun City. But she too, I had to disappoint, “It’s not that kind of video." 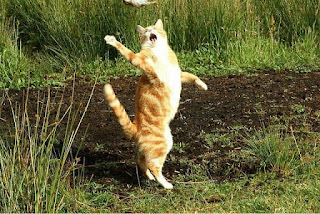 My buddy J. Beaver thought he had the perfect lyrics for the music track. I didn’t tell him he sounded like Jennifer on the fence at midnight before the vet took care of her affliction. 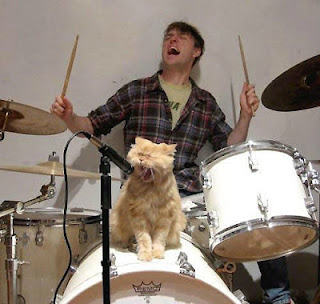 The only one I seriously considered for the gig was my dear friend, Sheen, He has done some fantastic videos for Fancy Feast during his career, but fame made him think he was  invincible like a tiger. When I heard he was in Palm Springs for a shoot a couple of weeks ago, I asked Judy to drive me to his hotel. I promised Judy that with Charlie - he likes to be called that by his friends – he could really put our video over the top. When we arrived at the hotel, it was clear my friend Charlie hadn’t cleaned up his act. He had caroused all night, incapable of an audition. 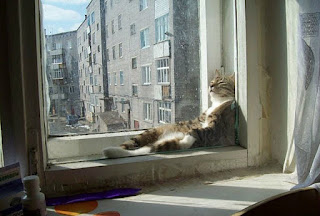 Finally, Judy and I finished the video. I didn't get a part nor did Charlie or any of my friends, but the video is great. Judy was so excited about the book, she agreed to invite Charlie, J. Beaver, Madonna,  and Marilyn for the screening.Jennifer had moved on.
Judy announced, "GOING HOME WITH A CAT AND A GHOST is so close to being done, I don't know who is more excited, Sportster and me or our readers.  Here it is. Roll it, boys." 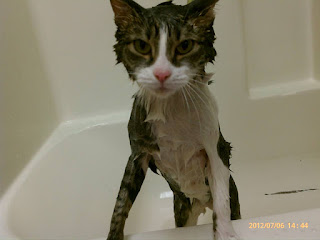 Oh my Gosh! The paparazzi are everywhere! I hope this doesn’t go viral. Judy will be so upset. I don’t want to ruin her clean, down-home image. I told her I didn’t want a bath. As soon as she woke me from my afternoon siesta and started taking off my clothes, I knew what she had in mind for me. She sneaked up and startled me. I didn’t have a chance to collect my thoughts…or hide. 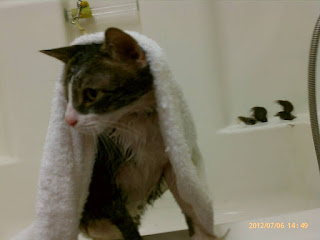 I don’t like to mention Judy’s dark side. She claims she hates to torture me, but yet she can’t restrain herself either. From the first day I arrived at the grooming shop, she swept me up and threw me in the tub. That first day I’ll admit I was secretly grateful. I had bugs crawling in the forest of my fur and the bath put an end to their creepy existence. After the experience was behind me, I felt wonderful, warm, and clean - and so loved. Judy saw to all my needs and we connected that very day. I knew she was the one for me. 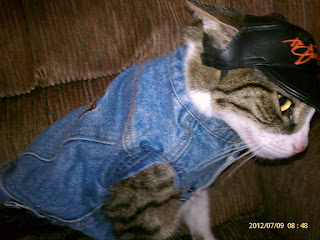 But Judy wasn’t sure of our relationship. I overheard her telling someone she didn’t like cats. What! Of course, she hadn’t got to know me. It didn’t take long to convince her of my delightful and charming character. I batted dog bows to the floor and made myself available to the nervous dogs, rubbing up against them and purring. I weighed only a few pounds back then and I took my naps curled up in a small basket of colorful bows. At home I made sure my naps occurred in her lap after we watched movies together.
But my final audition I passed with flying colors - Harley colors. It was the “Designer Clothes for the Cat Test.”  When I aced that, I was in. Judy was hooked like cat claws in a curtain.


I tolerate Judy’s dark side. I’ve never drowned and I always succeed in working the situation for extra attention and treats. And, what can I say? I feel good when the day is over and I smell of lavender. My fur is soft, fluffy and Judy rubs my belly singing, “Soft kitty warm kitty. Little ball of fur, kitty. Happy kitty, sleepy kitty. Purr. Purr. Purr.”
Posted by Judy Howard at 6:28 PM No comments: 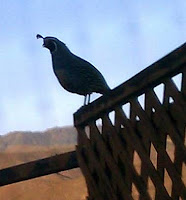 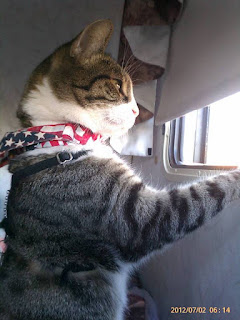 Jojoba Hills SKP RV Park is one of my favorite places. I purr and meow, rub and roll, when Judy announces we are coming here. No matter where we stay in the park, the scents in the air vary from sage and cacti to rabbits and quail. Summer or winter, the breeze blows gently down from Mt. Palomar.

I have been here since Friday and am sorry to say we disconnect our electrical cord tomorrow, the Fourth of July. We spent most of the days writing, editing, rewriting and then repeating the process over and over again. Afternoons I retired to my bed while the words and phrases danced in my head until Judy returned from the pool, or happy hour, or dinner out with friends. Evenings and mornings are the best parts of my days because Judy is not distracted with the myriad of duties with which humans feel compelled to fill their life. 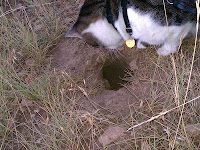 I have tried to teach Judy the simplicities of life, that the universe has its own clock and  ticks to its own schedule. I am in tune with its pulse. You will never see me pacing over what the future has in store. My future is this moment, as I study a bird on the fence. My attention may stretch into the next five minutes but only until it takes flight. Then my feathered friend becomes part of yesterday and I am blessed with the ability to forget.  I believe Judy is catching on as she joins me to examine a bug's journey in the dirt.

But tomorrow belongs to Judy and she has explained that those complexities I mentioned have to be dealt with if I want to continue my lifestyle. She reminded me that not all cats live in the moment and are able to leave yesterday behind them, pointing out the commercials on TV for the SPCA. Her poignant comment caused me to cease my complaints as quickly as if she’d used the squirt bottle.

So I padded down a different track as I pondered the Fourth of July and its significance. Judy told me it had been Jack’s birthday. I didn’t know Jack when he lived but from all Judy told me I believed it was his hand guiding me as a kitten when I struggled on the streets of Sun City looking for morsels of food. When I was weak with hunger and thirst, an apparition floated in and out of my consciousness, whispering in my ear. I have seen pictures of Jack. The ghost in my dreams wore the same Harley hat and shirt. Judy told me the Buddhists believe an animal born after the death of a loved can possess a piece of the loved one’s soul. I don’t know if Judy agrees but she thinks it surreal that her birthday and mine are the same.

The Fourth of July means freedom. I wonder how many other countries a cat is allowed to travel across the land without a passport. I have rolled in the red dirt in Bryce National Park and driven past Elvis’s Graceland. Although I consider water only a means to satisfy my thirst, I trembled at the sight of Niagara Falls. The images of Ground Zero, The Pentagon Memorial, and The Flight 93 Memorial live in my mind and I will always wonder about the spirits of my animal friends born after 911 .My freedom permits me to sleep anywhere, in either of my two homes. The Fourth of July represents these privileges and I don’t want them taken from me.

I have met cats at the shop who lost these opportunities because they hissed and growled and refused to conduct themselves as respectable cats. They’ve never ventured out of Sun City. I’ll try not to meow when Judy works too long and I will with hold my urge to squeeze past the fireplace screen to gain immediate attention when I feel I’m ignored. Freedom is a privilege I don’t want taken from me. When I look in the mirror I am proud of who I am and I am grateful. God Bless the USA. 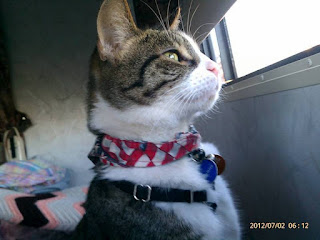 Posted by Judy Howard at 6:53 PM No comments: