THE WRITINGS OF A WANDERING WIDOW: TOMORROW! TOMORROW! FREE TO MY READERS!

THE WRITINGS OF A WANDERING WIDOW: TOMORROW! TOMORROW! FREE TO MY READERS!: In anticipation of   the release   of my new book,   MASADA’S MARINE,   The journey of   a service dog and her Marine ,   I am offering a ...
Posted by Judy Howard at 1:47 PM No comments:

HOME SECURITY, THE C.N.A. AND THE MARINE CORPS

Hello fans. Some of you are growling that you haven’t heard from me lately. I know Judy posts these photos that depict that I am like all my other cat cousins. 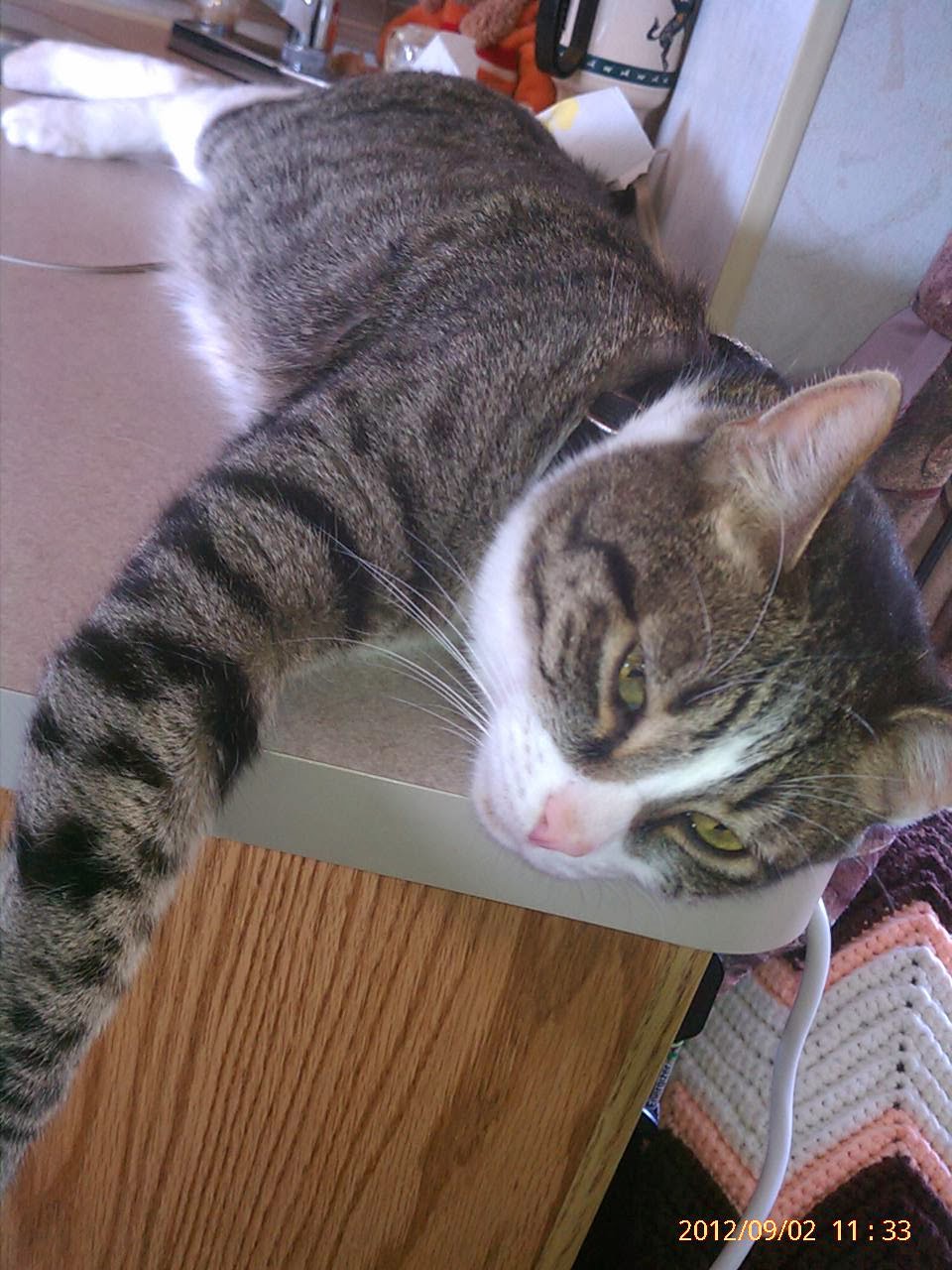 Yes that’s me after a long day on the road. 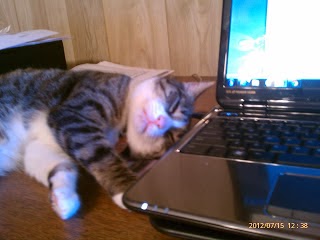 And yes, I know. That was after a long day at the computer. 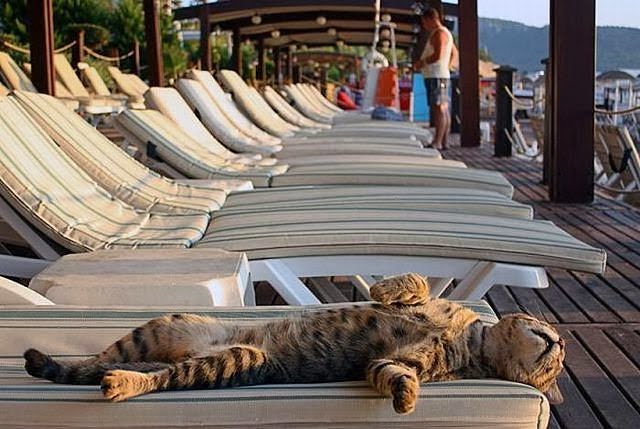 Judy monitors my mail and finds these photos my friends send to me. I know none of these show how my feline friends are hard working, I want to explain and  defend my friends.

I met Tallahassee Tabby  when her mom PEGGY KASSEES attended the 2013 Santa Barbara Writers Conference. T.T., that’s what I call Tallahassee Tabby, Sent me this photo after she and Peggy returned to Tallahassee, Florida from that hectic conference in California. T.T. told me her mom, who is president of the Tallahassee Writers Association, was busy that day writing an article for the club. 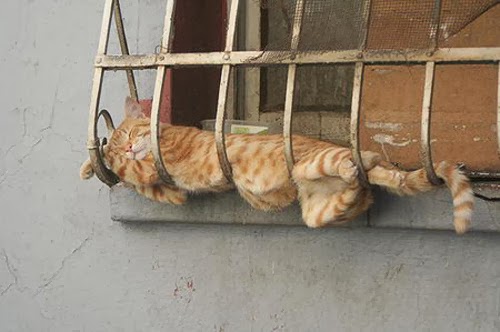 This is my friend  from New Orleans, Louisiana. This is a selfie he took on Bourbon Street after last year’s Mardi gras.  The only explanation I  have: He says he  NEVER overdoes it like he did last year.


I’m trying to  explain to you, my fans, that  pictures are deceiving. Take a look at the following  photos and I'm sure you'll be convinced, I am not a lazy cat.

I've had to wear many hats lately. The first hat, my CNA Nursing  Association hat. Judy was sick for almost three days. . Nothing serious, just a very bad cold. Remember  when Judy was sick in the emergency room in Deming, New Mexico? The nurses there gave me  honorary membership for taking such great care of my mom. 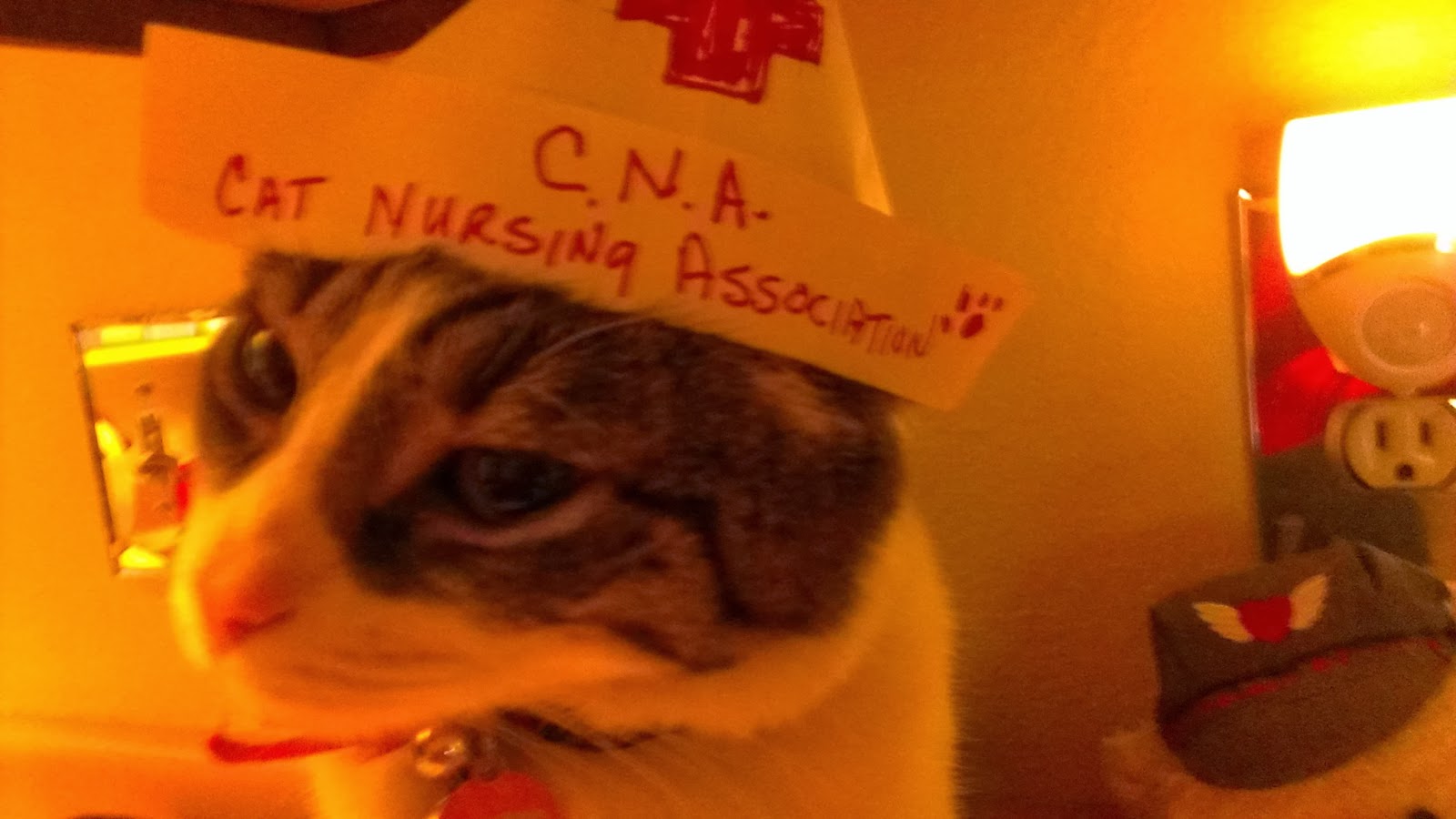 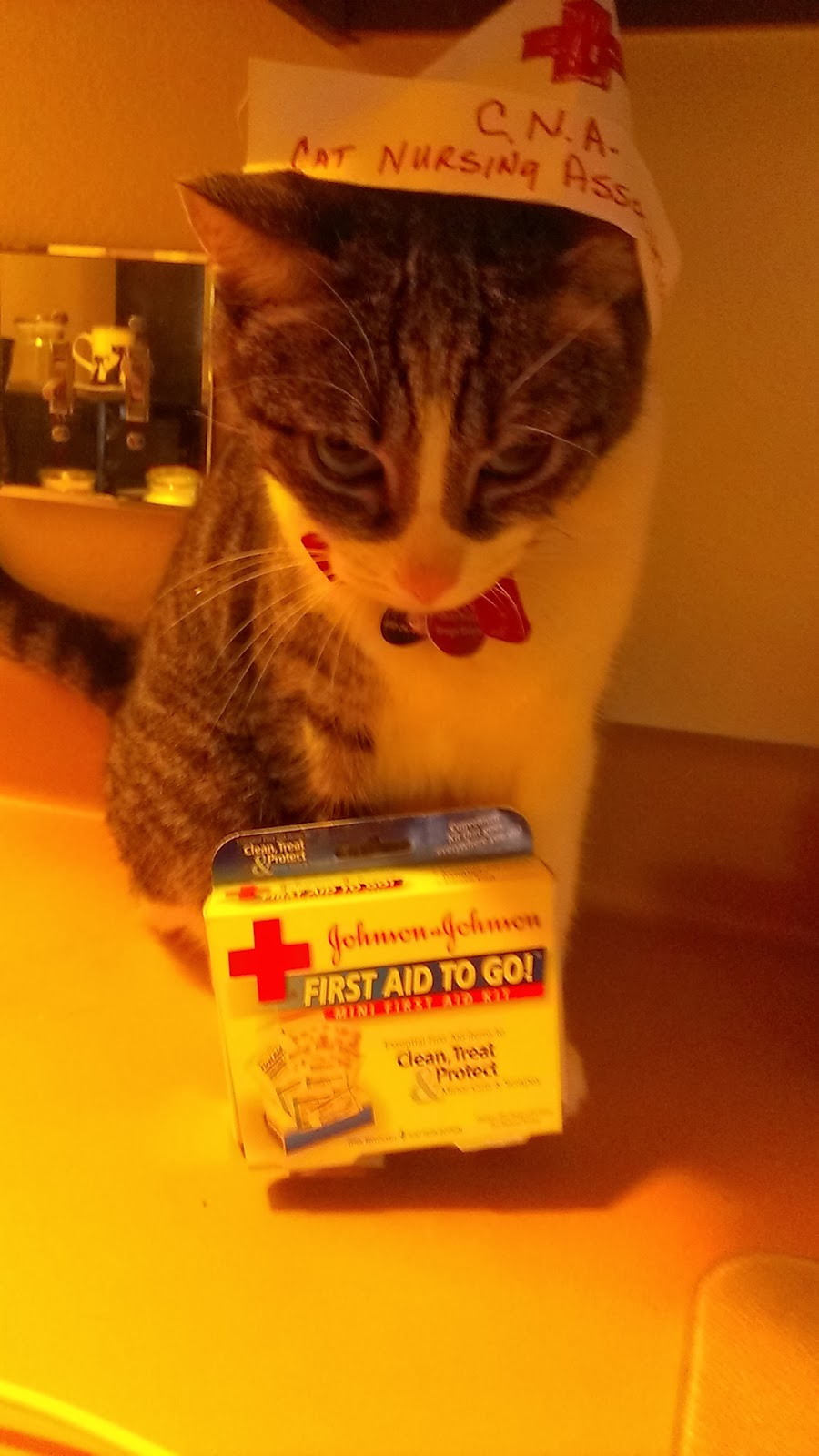 First she was hot then she was cold, then she was hot and then she was cold. When I was snuggled up in the covers to keep her warm, she kicked them and me off the bed. "I'm hot." she complained,  When I wanted to entertain her, she pulled the bedsheets over her head and ignored me I'm sure if she had played peek-a-boo with me she would have felt better.  Mom always complains I sleep too much, but now I understand  how boring that can be.
On the second day,  due to my excellent care,  she began feeling better. I found  old movies on AMC, "Passage  To India" and "Dr. Zhivago" and the day passed pleasantly. 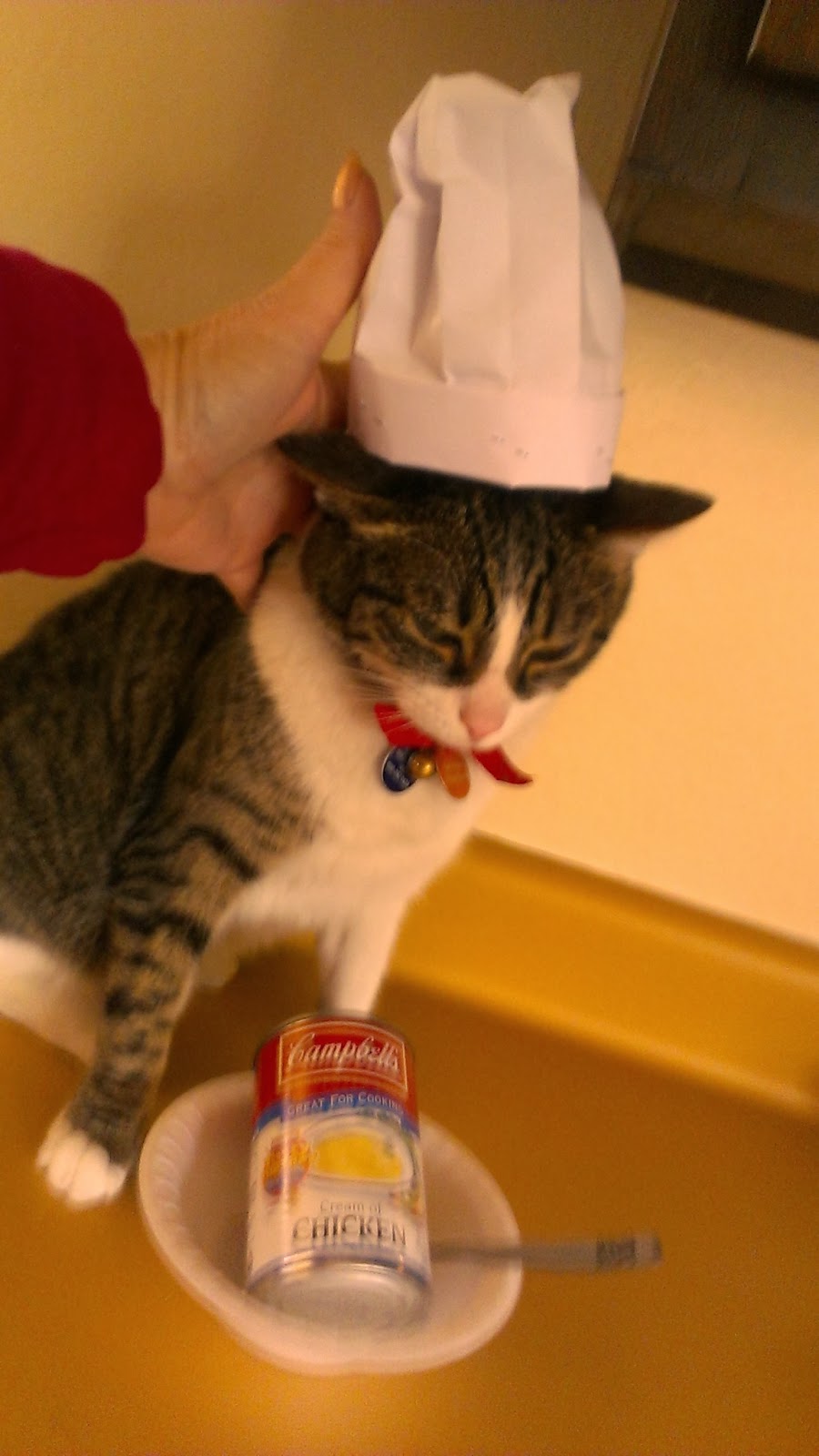 I periodically had to take off  my nursing hat and replace it with  my chef's hat.  Although opening a can of Chicken Noodle soup is in no way  a demonstration of  my culinary abilities, that was all she requested.  I  made sure she drank lots of water too.
Last week, before Judy fell sick, we both had  been freaked out because a friend Judy walks with, who lives four houses down, was a victim of a home invasion robbery. Luckily the two men only knocked the woman to the floor while they stole her jewelry. I’m sorry if you disagree, but if I had been on duty, they'd be calling the coroner, not 911.

Lucky for us, Judy had already signed up for firearms training at Front sight Firearms Training Institute in Pahrump, Nevada.Unfortunately, I had to cancel Judy’s first class until she felt better. So now I have put on my beanie hat and taken over home security. 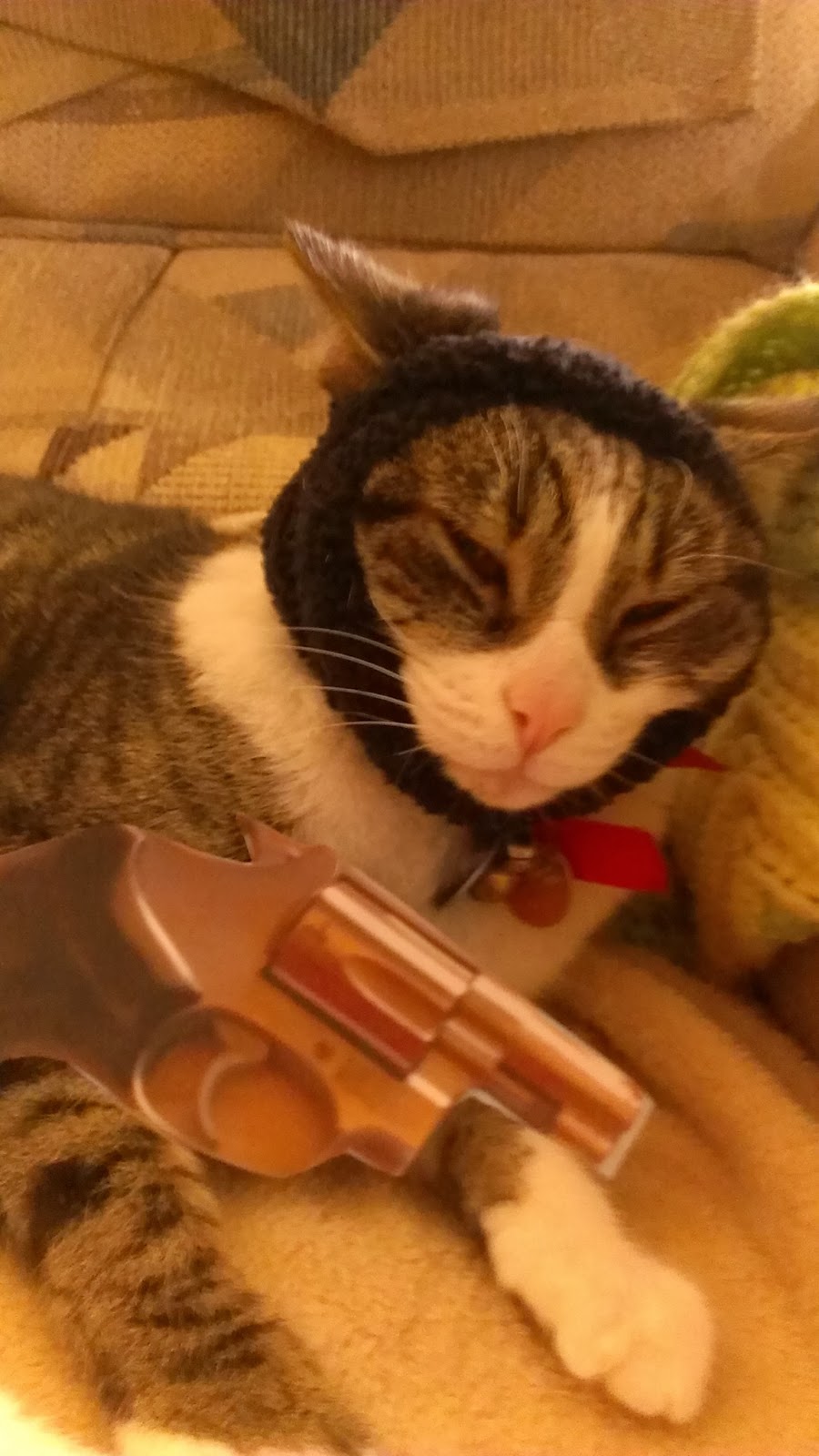 Spread the word. Until Judy sharpens up on her firearm skills, I'm on duty. I can be a bad ass cat.

Before Judy took to bed  with her horrific cold, I had also been busy with her editor. INVISIBLE HEROES is nearing its final stages and we all have been working long hours.


With the book near completion, Judy is looking  at cover designs as well as, what we call in the book business, beta readers. Beta readers read the manuscript not just for grammar accuracy, which of course is important, but also to examine the structure and believability of the story. INVISIBLE HEROES   is about a puppy growing up to become a service dog for an Marine veteran coming home from Iraq who struggles with post traumatic stress disorder.

In this case, a Marine who served in Iraq would be an excellent beta reader as well as some one who trains dogs for service work. Judy and I are processing applications, so if you know of someone, please reply in the comment section. 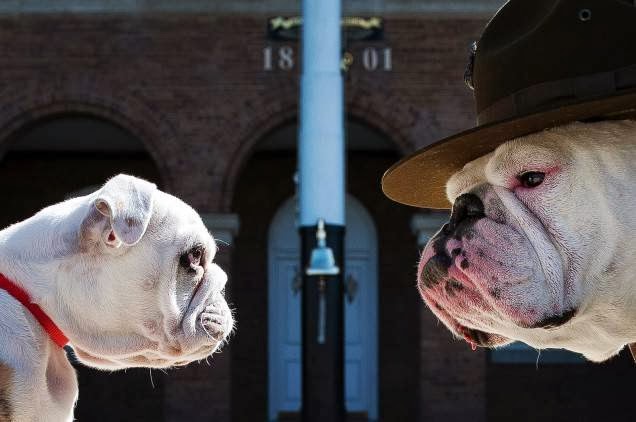 The  two guys  pictured above mentioned an interest but, really? I know they're the mascots for  The Marine Corps but ...really?
Judy's feeling much better thanks to my excellent care taking.  Be sure to click on the link below  to reach  her blog  for updates to her  schedule.

THE WRITINGS OF A WANDERING WIDOW: STARTING OUT WITH A BANG

THE WRITINGS OF A WANDERING WIDOW: STARTING OUT WITH A BANG: January’s   down – eleven months   to go. The new year   started out fast and furious   similar to   Sportster when   his frisky moo...
Posted by Judy Howard at 5:41 PM No comments: